- May 07, 2018
I've always tried to seek out the most interesting places in the world to run. So I couldn't resist signing up for Mayor's Midnight Sun Half Marathon in Anchorage, Alaska.  This race is during Summer Solstice weekend when there's almost 24 hours of daylight in Anchorage and the post race party is an all night long street fest with music, food, drinks and dancing and the sun never goes down. I would say that the party goes until the sun comes up, except that it never actually sets.

My friend Alfred and I spent a few months planning our trip and when race weekend finally arrived, I flew five hours from Chicago to Seattle and then another four from Seattle to Anchorage. My flight landed sometime in the middle of the night but since the sun was still up, I had no idea what time it was. My sleeping patterns were a bit off for the rest of the trip because of the constant daylight but I didn't mind. 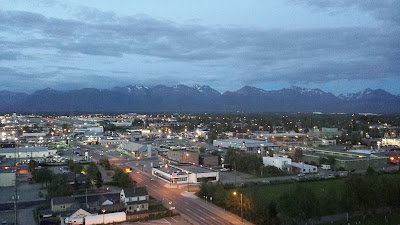 Something I found to be pleasantly surprising about Anchorage was the weather. If you have an image in your head of Alaska being a barren land covered with snow and ice, let me dispel that right now. Anchorage is one of the most beautiful places I've ever visited during the summer. Most days were sunny with a small amount of cloud cover and the temperatures were mild enough that I felt perfectly comfortable outside in just a short sleeve shirt. 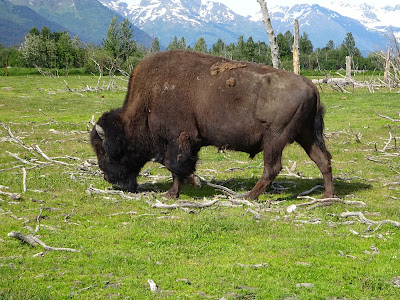 After Alfred and I met up in Anchorage, the first item on our agenda was a road trip down the Seward Highway with a stop at the Alaska Wildlife Conservation Center. If you ever visit Alaska, I highly recommend taking a drive down the Seward Highway, which is a 125 mile route that goes from Anchorage to Seward and is one of the most scenic drives you'll ever take.  It goes through Chugach National Forest and the Kenai Peninsula and there are tons of places where you can pull over and get awesome views of the scenery and local wildlife.  It also goes right along the coast so on one side of the road you can see mountains, glaciers, bears, elk, eagles, etc… and on the other side you can see dolphins and whales jumping out of the water. 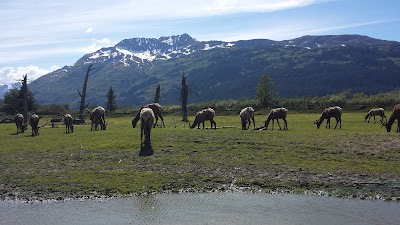 The Alaska Wildlife Conservation Center is a 700 acre sanctuary for bears that can't live in the wild anymore because they've lost their fear of humans (typically due to too many people feeding them). Bears who aren't afraid of people also aren't afraid of breaking into houses and ripping the doors off of refrigerators to help themselves to a tasty meal. This puts them at risk of getting shot by homeowners and it also puts the homeowners themselves at risk. Don't feed wild bears. 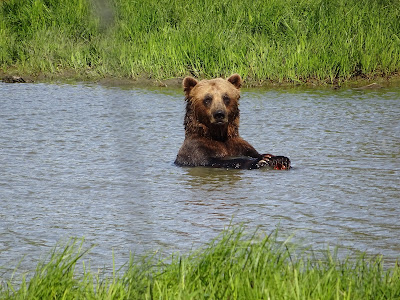 In addition to being a bear sanctuary, the AWCC has a number of other programs that support local wildlife. They recently re-introduced a herd of buffalo into an area of Alaska where they had been extinct for decades. They also rehabilitate injured wildlife and have a breeding program for local endangered species including caribou, bald eagles, moose, lynx cats and a variety of other animals. And the sanctuary is so well laid out and maintained that it tends to attract a lot of local wildlife, especially during feeding time. If you happen to stop by in mid afternoon you may find yourself treated to the sight of a bear and a bald eagle competing with each other for a steak dinner. Also on our agenda was a hike and a boat tour to check out some of the glaciers in the area. I was surprised when our tour guide told us how much the glaciers had receded in just the last 20 years. It makes me sad to think that that if they continue to shrink this rate, many of them could be completely gone within my lifetime. Even so, the ones we saw were breathtaking. 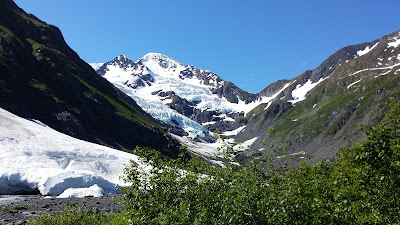 Remember that beautiful summer Alaska weather I mentioned? Race day was a different story. The night before the race, storm clouds started to roll in over the mountains and by midnight we were being deluged by severe thunderstorms that continued all night and well into the next morning. When the race started, my feet were soaked and freezing just from standing at the start line.

To make things worse, the beginning of the course is  almost straight downhill. This is usually not a bad way to start a race, but on that day, rain water had been streaming down the hill and forming large puddles at the bottom which were next to impossible to avoid. By the time I reached the first mile marker, any remaining part of my body that wasn't already wet before the race was soaked. After a few miles the course heads back uphill at an incline that's anything but gradual. By the time I hit the halfway mark of the race, not only was I running uphill at about a 7% grade, but the raindrops had gotten bigger and there were massive headwinds blowing with such force that it felt like my face was being pelted with small pebbles instead of rain drops. At mile 7, the course took a turn onto a dirt trail that wound through a forest. This was nice because the dense trees blocked the wind, but the problem was that after soaking up rain water for the previous 10 hours, the dirt trails had turned to slippery mud. I lost count of the number of runners I saw sliding down the hills on their backsides and after a while I started to feel like I was doing a mud run instead of a road race. 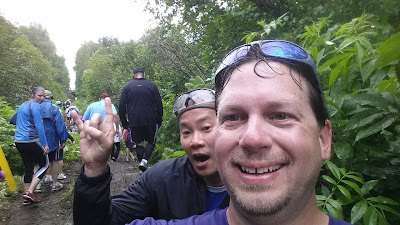 At mile 8, I did something that I'll probably never do again: I stopped in the middle of the race to take a picture of a moose that was standing alongside the course. I wasn't the only one. The crowd that had gathered to take pictures was growing until a runner who lived in the area mentioned that moose can be quite mean if they feel threatened. And based on the way this one was standing, she looked to be extremely agitated and most likely had some babies close by that she was protecting. I had already gotten my picture and didn't want to get trampled by an angry moose, so I decided that it was time to move on. 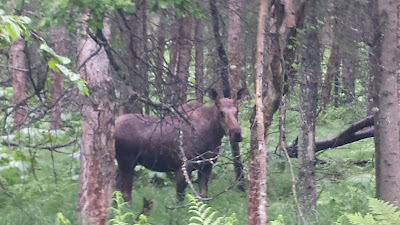 The rest of the course was a lot easier. Most of the final five miles were downhill and the wind and rain were starting to let up. This was perfect timing since this part of the course was right next to the Cook Inlet coastline, where we were treated to breathtaking views of the Anchorage skyline and the surrounding mountains.

For as tough as this race was, it will always be one of my favorites for a couple reasons. For one thing, being able to tough it out and still finish the entire course in those conditions felt pretty badass after I was finally done. More importantly though, I felt more connected to nature than I ever have at any other moment in my life than I have during this run. 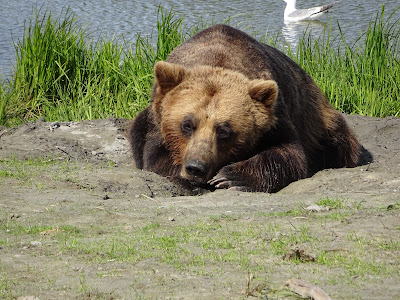 This is another benefit of traveling. The more frequently you travel, the easier it becomes to see the world through a different lens. This makes it easier to be compassionate about others and the world around us. When you get up close and personal with a grizzly bear, you see that they aren't big scary creatures, but animals that are just trying to survive and feed themselves the same way you and I do. When you experience the bittersweet feeling of touching a glacier and taking in it's natural beauty while also realizing that you're doing something that the next generation may never be able to do, you develop a passion for the environment and pledge to do what you can to protect it. And when you have to run away to avoid being trampled by an angry moose that's trying to protect her babies, you realize that the bonds between a mother and her children aren't unique to just people.

As I boarded the plane to return home from Anchorage, I took one last look around and thought about how there may not be another place on Earth that's this beautiful. I also thought about how we all need to try harder to protect our natural resources so that future generations can have the same types of experiences that I had. I can't wait to go back. 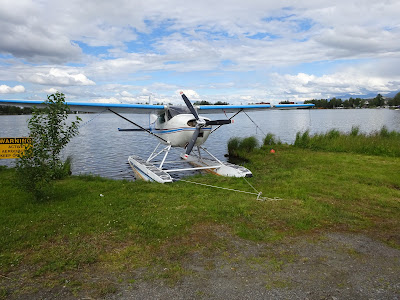 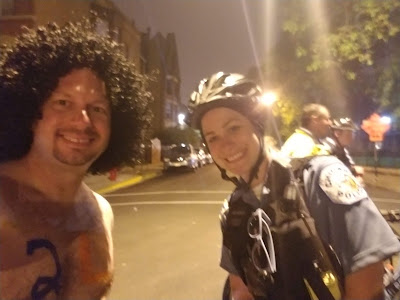